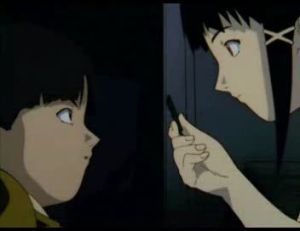 Now that Lain has been testing her abilities, she has learned more about her world, and about her place in it. However, there are still things going on that cannot be easily explained. A lot of information is given in this episode. Remember that science fiction is a genre of setting. What does the information given tell you about the setting and furthermore about the plot? Look at the questions at www.amdmathews.com and post you response to this episode here!